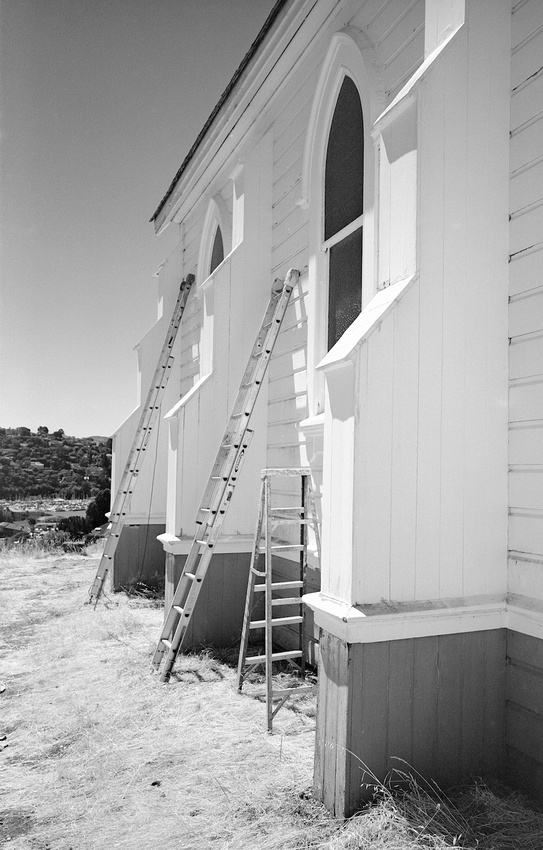 Every photogenic old church in the Bay Area has had Ansel Adam's sublime treatment. Usually St Ansel's image is so superb that it puts you off going anywhere near the same territory he's already marked. Even worse, when he was photographing, the Bay Area was much less built up so he rarely had unsightly powerlines, encroaching houses and highways to deal with. So I count it as something of a coup that I have taken an image of an "Ansel" church that I'm proud of!

About a year and a half ago, during one of our hot dry summers I decided to go to Old Saint Hillary's Chapel in Tiburon st midday at the sun's harshest height. Fortunately for me, the church was being painted by a solitary man using several ladders. At times, he would head back to the utility shed behind the church to clean his brushes or get new materials. So in one of his absences, I captured the North side of the church with three ladders leaning up against the simple white structure.

My tool of choice that day was one of my favorite medium format cameras the Fuji GF 670 paired with my favorite medium format B&W film - Ilford XP2 Super. Scanned at high resolution, slightly sharpened in post processing, and with the gamma level turned up a touch, the image really spoke to me with it's harsh shadows, and high contrast between the windows and the walls. The digital image really doesn't do the final printed photograph justice. I used Epson Velvet Fine Art paper to give a painterly quality that comes pretty close to the look of a silver gelatin print on matte paper.

best essay writing site(non-registered)
An over unique music energized will in everyday go for the metal and mainstream music, while excited individuals like wistful and love tunes. An individual listen tunes according to what he is feeling straightforwardly by then.
No comments posted.
Loading...
Subscribe
RSS
Recent Posts
Culling the lens herd How to put a barrel lens in a shutter How to avoid Fix Exhaustion Book Review: Un-American: The Incarceration of Japanese Americans During World War II My favorite black & white developers Good lenses for an 8x10 view camera Good Lenses for a 4x5 View Camera What is the ULF format for you? Suggestions for a 21st Century Darkroom Old Saint Hillary's Chapel
Keywords
Equipment Review 8x10 ULF 14x17 lenses how to 4x5 image sharing xp2 6x17
Archive
January February March April May June July August September October November December
© Angus Parker Photography
User Agreement
Cancel
Continue