The search for the perfect film format 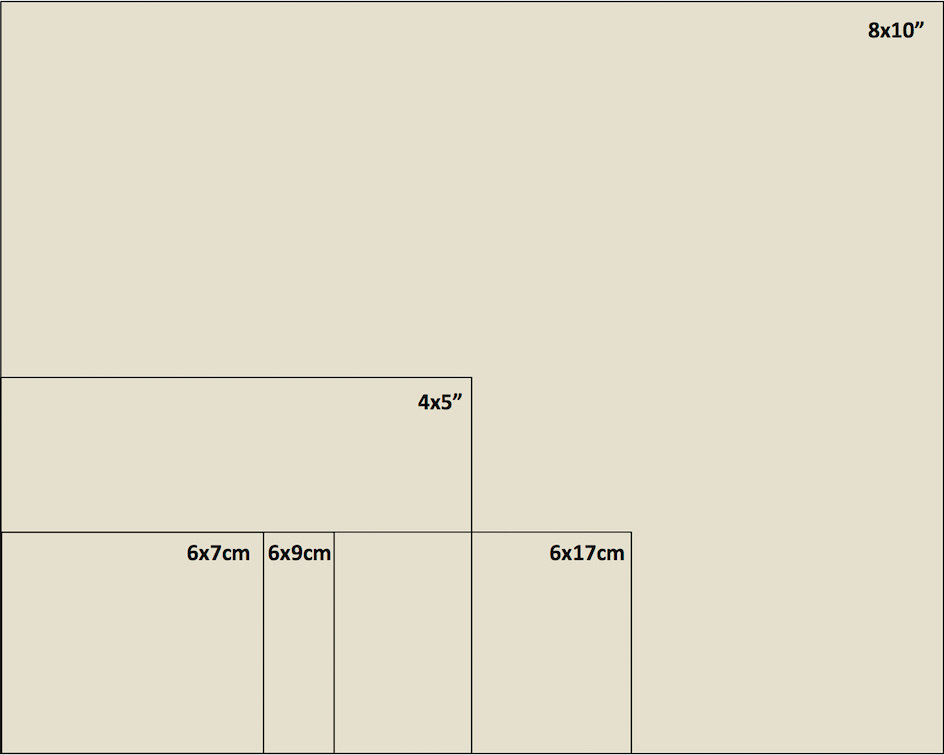 Film FormatsFrom 6x7cm to ULF what is the best format?

In the past four years since I've returned to film photography I've used numerous medium and large formats. Initially I started with medium format 6x9 with a pair of Fuji GW690iii and GSW690iii, the so called Texas Leicas. I largely replaced these cameras with two modern 6x7 cameras with built in meters, namely the Fuji GF670 and GF670W, to reduce size and increase handheld portability. Then I moved to my first large format with a 4x5 Chamonix field camera, followed by a helical cone 4x5 point and shoot Fotoman 45SPS. Then I added the 6x12 and 6x17 panoramic formats with a Noblex 150UX swing lens camera and a Shen Hao PTB617 view camera. Finally I gave in to the lure of larger formats with a Ritter 8x10 and Chamonix 14x17. So in a way I've tried out many of the available formats in film world except returning to the 35mm of my childhood. So perhaps now it's time to reflect on the various formats I've used and rationalize down to a smaller sub-set if I can!

While you can divide these formats into medium or roll formats and large or sheet formats, in terms of functionality it's not quite so clear since some of the advantages of the format comes from the type of camera used, i.e. point and shoot camera, swing lens camera and view camera. You can and I do use a view camera with roll film, and you can and I've tried using a fixed lens point and shoot camera with sheet film. So instead I'll go through what I see as the benefits of each possible combination:

Point and shoot with roll film formats 6x4.5 through 6x9

I've used the Fuji GW690s and GF670s in this category. In my opinion, these cameras really shine when you are using a dye based film either E6 slide transparency or C41 color negative film, rather than traditional black & white because you get increased resolution which can really be pulled out in a good scan or analog optical enlarger. I especially include Ilford's wonderful XP2, a B&W film developed with the color negative C41 process. With those dye films you can enlarge to my preferred print size of 14x17 without any loss of detail. I've found that's not always the case with B&W film. But you may like their grainier authentic B&W film look.

In my view you can either use two fixed lens cameras (one wide and one normal) or one interchangeable lens camera like the excellent Mamiya 6 or 7 cameras with two or more lenses. Either option gives you plenty of flexibility and relatively low weight / volume given the image quality possible. There is no movements possible unlike with a view camera but with helical mounts it's easy to shoot using depth of field markings or a coupled rangefinder as most cameras in this category have.

Beyond 6x7 or 6x9 formats it's possible to find 6x12, 6x17 or 6x24 panoramic cameras in this category. These cameras often have large heavy cones and use large format lenses rather than integrated leaf shutter lenses or proprietary lens mounts. Typically they don't come with rangefinders and rely on depth of field markings or ground glass focusing. While these cameras are rugged, they tend to be quite heavy, bulky and not very flexible given a single focal length and focusing limitations. In my opinion in most use cases you are better off using a view camera with roll film holder as described below. Having said that I haven't used or owned one of these cameras.

I've used the Fotoman 45SPS in this category. It takes regular 4x5 sheet film in a regular film holder. The lens is parallel to the film plane although you can shift a small amount upwards. The main advantage is the larger negative but this negated by the weight of the camera and the size of the camera with its cone. It's really neither fish nor fowl: none of the advantages of the field view camera - movements and compactness, multiple focal lengths and none of the advantages of the fixed lens roll film camera - speed of use, light weight, multiple images etc. Also you are really restricted to one focal length unless you are willing to carry around another heavy cone and lens. Plus any cone over 90mm in length starts to be unwieldy. Really the sweet spot for this type of camera is when using a super-wide lens like the Schneider 47mm which has little or no movements anyway and gives you a very small and flat cone. In hindsight one of the older Cambo cameras with the 47mm lens would be the best option in this rather special use category.

I've used the Noblex 150UX (6x12) and 175UX (6x17) in this category. These cameras have a small sharp fixed focal length lens that mechanically swings around focusing a portion of the image at a time on a curved film plane. They are moderately heavy and moderately bulky but have really sharp lenses and super wide field of view - so much so you have to be worried about getting your fingers in the picture on the sides! All focusing is by depth of field made by combining a three level distance setting with an aperture setting. It's simple to use and the results speak for themselves. But this is a really specialized setup with limited applications. Something to definitely consider if you love panoramic formats.

View camera with roll film in 6x9 through 6x17

I've used a dedicated Shen Hao PTB617 view camera with roll film back and a 4x5 view camera with 6x12 roll film back. These setups give you multiple focal lengths at relatively low weight, the important shift movements, and the relatively less important tilt movements. If you are a panoramic junkie, a dedicated camera like the Shen Hao is a no brainer, but if you are an occasional panoramic shooter and already own a 4x5 view camera then a roll film back makes more sense. Either way you'll get to use more film types than the limitations imposed on you by using sheet film.

I've used a Chamonix 45F1 and Ritter 8x10 in this category. View cameras have the functionality to make movements of the film relative to the lens plane. As such they are invaluable for architecture and certain still life subjects where converging verticals become a problem otherwise. Each sheet of film can be independently developed to allow for easier N+ or N- management. View cameras can use many different focal lengths and more flexible as a result. 4x5 film is really the sweet spot given the different types of film available, the size of the negative and the size of the camera. Its optimal for optical enlarging or digitally enlarging using a scanner. 8x10 becomes more unwieldy. While the negative is four times larger the resolution gains over 4x5 aren't really worth the extra weight of larger film holders, bigger lenses and bigger cameras. Where 8x10 might become attractive is in contact printing since 4x5 contact prints while nice really don't have the scale most people prefer.

I've not owned any camera in these formats. While I do like panoramas I'm not really attracted to them in large format because the cameras are so specialized in their use and the film is expensive, not easily available, and mostly limited to black & white. Contact printing is the most likely way you are going to be producing output or using an expensive drum scan. A high resolution scan of 120 roll film in pano format will get you equivalent quality output at large print size so I guess I don't really see the reason to tie myself up with one of these cameras. Plus most of the cameras in this format are turn of the 1900s banquet cameras designed for portraits of large groups and their bellows do not extend very far. Odds are you will have to be happy with a wide or wide-normal perspective. Wet-plate processes are where these cameras shine as a cheap way to get into historical photographic processes.

I own a Chamonix 14x17 camera in this format. Really what is there to say about ULF? It's the province of madness. Again you are pretty much restricted to contact printing unless you pay for a drum scan and have a very powerful computer able to post process such huge files. Lenses are large, cameras are huge and film holders gigantuan. You will probably need to upgrade your tripod/head, carrying cases and still need an assistant. In the smaller sizes wet-plate processes might be where these cameras shine. I don't know since I don't do wet plate. Putting the enormous film negatives on a light table is quite the rush.

So which combination is best? I think it's fairly easy to rule out Point & Shoot cameras in panoramic roll film formats and Point & Shoot helical cone based cameras using 4x5 or 8x10 sheet film. Otherwise, I would suggest it's basically a personal choice between a couple of sweet spot combinations: Point & Shoot in 6x7 or possibly 6x9 roll film formats, and a view camera in 4x5 sheet format. Besides that if you 'see' in panoramic format I highly recommend the Shen Hao PTB617 or Noblex 150UX. As mentioned before ULF is the realm of the mentally unfit - but it's such a nice asylum.

Harold Clark(non-registered)
I enjoyed reading your blog, lots of good info there and food for thought. Regarding formats, I consider 5x7 ideal, handling much like 4x5 without the difficulty and cost of 8x10. I prefer 4x5 when travelling light or for colour due to cost and availability of film. Setting up the 8x10 is a big production and film cost for colour is prohibitive.
Jackson Pine(non-registered)
Get the F*** out of photography. Reading your excruciating article of all the different formats you've used. You're pathetic. You're not interested in photography, you want to buy cameras. You're a shop a holic. You are addicted to the next camera. You care nothing for making images. Pathetic.Get out.
Angus Parker Photography
I should update that I have a 1895 era 11x14 that is very light for ULF and now I consider that the sweetest of sizes for ULF, because it has presence, it's easier to buy film, and everything is just that much more manageable if you are on your own.
Angus Parker Photography
@ G.Yelleswara Rao - Thanks for the compliment.
G.Yelleswara Rao(non-registered)
Very informtive article for L F lovers, Thanks.
No comments posted.
Loading...
Subscribe
RSS
Recent Posts
Culling the lens herd How to put a barrel lens in a shutter How to avoid Fix Exhaustion Book Review: Un-American: The Incarceration of Japanese Americans During World War II My favorite black & white developers Good lenses for an 8x10 view camera Good Lenses for a 4x5 View Camera What is the ULF format for you? Suggestions for a 21st Century Darkroom Old Saint Hillary's Chapel
Keywords
Equipment Review 8x10 ULF 14x17 lenses how to 4x5 image sharing xp2 6x17
Archive
January February March April May June July August September October November December
© Angus Parker Photography
User Agreement
Cancel
Continue